The only reason we make nets is to kill, according to Dominick Martin-Mayes, the fisherman who came upon the chilling sight of hundreds of dead sharks and other marine life floating lifelessly in an enormous fishing net. The net certainly did its job and now it's breaking our hearts, demonstrating just what human carelessness can do.

While many people are trying to break free from single-use plastic, others are trying to find ways for us to continue using it more sustainably. Who ever thought that might require using fish poop? MarinaTex is a new bioplatic that is made from the waste of fish along with red algae. Not only is it made from renewable resources, but it breaks down in a couple of weeks, making it an incredible, revolutionary product.

This might be weird but it's also pretty incredible. The Exhale Bionic Chandelier is the first living chandelier that not only looks gorgeous but also purifies your air. That's because it's made with micoalgae (which is technically a plant, not an animal, but it's still very weird and cool in this example!). It's the first living object that will grow and light your space while purifying your air as it pulses with life! 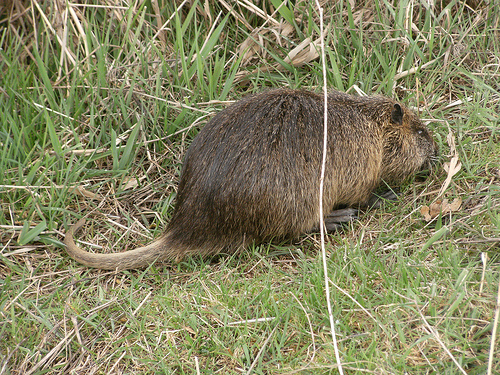 Hurricane Isaac proved to pack a much bigger punch in terms of water than it did winds. And in the case of nutria, that's a mixed blessing.

The rising storm waters, coupled with the astonishing amount of rainfall, conspired to drown nutria by the thousands. Nutria are an invasive species, highly destructive to the fragile marshland ecosystem, and their numbers are growing every day. So in that sense, the death brought by Isaac is a good thing.
Unfortunately, thousands of dead nutria don't just vanish. They wash up on the beach, where they quickly begin to decompose in the hot late summer sun, as many as 20,000 corpses by some estimates. The beaches of Mississippi are particularly badly hit, with the rotting bodies of nutria lining the wrack line for miles in every direction. It's a serious health hazard, not to mention a disgusting experience for locals. The smell apparently carries well on the ocean breeze. (Yuck!)
Even in death, the nutria are causing a huge problem. State and county clean-up crews are unprepared (both equipment-wise and psychologically) for cleaning up such a huge, putrefying mess. The added flies and bacteria could prove damaging to the local environment.
A situation where "giant shrimp" isn't an oxymoron

The Asian tiger prawn is a real monster of the "shrimp" world. To quote the Houston Chronicle, it is "a foot-long crustacean with a voracious appetite and a proclivity for disease." And it's starting to show up in the northern Gulf of Mexico.
Asian tiger prawns (Penaeus monodon) are, as you might suspect, a native of Asia. Their natural habitat is the western Pacific, along the coastline of Asia, Africa, and even as far south as coastal Australia. It is the "most widely cultured shrimp in the world," and for good reason. Economically, the Asian tiger prawn grows quickly and provides a lot of meat. The meat is also more flavorful than many other species, and is in high demand on the market. What more could a shrimp farmer want?

Back when I was a teenager, I loved lizards. I had a few of those small chameleons and a gecko, but that was about it. I was fascinated with how they lived and what they ate. I didn't even mind their food (crickets) getting out of the cage in the middle of the night. I loved my lizards, but I don't think they loved me. I always take interest, though, any time I see something new about lizards. However, if I would have seen one of these lizards I would have probably run for the hills. 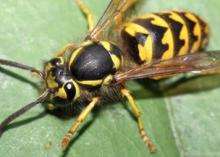 Have you ever swatted at a wasp before to keep it away from you? Well watch out! A new study finds that wasps are able to recognize faces.

Scientists have discovered that paper wasps are able to recognize and remember other wasp's faces and that they are pretty accurate at it, too. 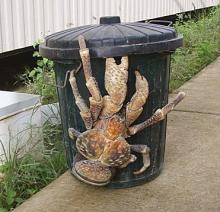 This is one crab I would not want to run into!

The Giant Coconut Crab, also known scientifically as Birgus latro, usually grow to about 16 inches in length, but there have been reports of crabs double that size. These beauties can live as long as 50 years and are the world's biggest species of land crab. 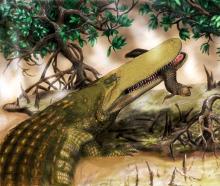 Paleontologists in Morocco have discovered a new kind of prehistoric crocodile. The croc, nicknamed ShieldCroc, sported a shield that surrounded the head area. This croc, measuring at 30 to 35 feet long, probably preyed on other large animals, although scientists believe that its jaw was weaker than those of the crocodiles today.
Air-breathing bird-eating aquatic enormities

One reason you'll never find me swimming in the Amazon is the abundance of wrongly sized fish that swim there. Either end of the spectrum freaks the crap out of me; you've got the tiny, invisible parasites who are strong enough to swim up a stream of urine into your body and infect you even if you never touch the water directly. That's just a boatload of nope right there. Then you've got the other end of the scale, where fish push past what my brain considers an acceptable size and become prehistoric monsters bent on devouring me and everything I've ever loved--or at least looking as though that's what they're plotting.

The place for cryptozoology buffs and cryptids, from the chupacabra to the yeti!

We Support
Climate Activism
Click to reach the League of Conservation Voters.
Conversation Processing Intelligence™ beta website!
Click here to visit the hub of the Klat Network.
This site is part of the Klat network of blogs, forums, and communities.