As autumn approaches, caterpillars start ramping up their feeding frenzy.  Most caterpillars spin their cocoons in fall, in order to emerge next spring as beautiful butterflies.  (Or, as is more often the case, as really boring moths.)  A caterpillar lives only to feed, and the later it gets in the season, the bigger - and more visible - caterpillars tend to become.

NOTE: Many caterpillars look cute and cuddly and fuzzy.  Don't be fooled!  As a general rule, the hairs of a caterpillar are poisonous.  Reactions range from mild itchiness to a full-blown reaction similar to that of poison ivy.  Never touch a caterpillar with your bare hands!  (Just in case, here's some helpful tips on dealing with caterpillar stings.)

Tussock Moth Caterpillar
This is a common answer to "What kind of caterpillar is THAT?"  The tussock moth caterpillar can be distinguished by the fuzzy bristle bumps on its back (which do indeed look a bit like tussocks) and the big showy clusters of orange-black hairs at the front and back.  This symmetry helps to confuse predators.  (Flickr/Gerald Yuvallos)

Giant Atlas Caterpillar
This pale, waxy caterpillar is one of the world's largest.  Which is only fitting, since it turns into the Atlas moth, which is the largest moth in the world.  The cast-off cocoons of the Giant Atlas caterpillar are so big, they are used as purses in Taiwan! (Flickr/Deanster1983)

Cecropia Moth Caterpillar
The Cecropia moth is the largest moth in America.  Unsurprising, then, that its caterpillar will pork itself up until it's nearly four inches long, and as big around as a hot dog! (Flickr/JG D70s)

Drinker Moth Caterpillar
The Drinker moth gets its name from its habit of drinking drops of dew from leaves and blades of grass.  This super-shaggy caterpillar is a familiar sight in England, where only the Cuckoo will eat it.  (Flickr/Deanster1983)

Monarch Butterfly Caterpillar
Monarch caterpillars eat milkweed, which makes them both poisonous and bitter-tasting.  Their bright colors warn predators of this.  But there's a mystery: so many new birds are born every year, and each of them has to learn that the monarch tastes bad.  But a bird can't taste a caterpillar without killing it.

There are a lot more new birds every year than there are Monarch caterpillars.  Why aren't all the caterpillars wiped out by inexperienced birds?  This mystery has yet to be conclusively solved. (Flickr/ohdarling) 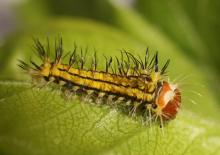 Japanese Oak Silkmoth Caterpillar
This silkworm feeds on oak trees.  Beautifully striped, with a lovely orange head, this tiny caterpillar produces a silk which is naturally white and therefore does not have to be chemically bleached. (Flickr/Deanster1983)

Clouded Yellow Butterfly Caterpillar
This plump green fellow will turn into the Clouded Yellow, a beautiful butterfly that varies from lemon yellow to a dusky orange. (Flickr/Deanster1983)

Abbott's Sphinx Moth Caterpillar
This formidably large caterpillar can grow up to four or five inches long.  Its striking color can vary from grays and browns to greens.  Often mistaken for the tomato hornworm, the Abbott's Sphinx Moth poses little danger to garden plants.  It enjoys eating Virginia creeper, which is a pest plant in many parts of the country. (Flickr/Birdfreak.com)

Woolly Bear Caterpillar
This famous caterpillar is supposedly able to forecast the weather!  Folklore has it that the wider the tan bar in the middle of the caterpillar, the milder next year's winter will be.  (The boring truth is that every woolly bear's stripe is a little bit different, and that they tend to widen with age.) (Flickr/graftedno1) 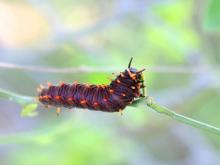 The place for cryptozoology buffs and cryptids, from the chupacabra to the yeti!

We Support
Climate Activism
Click to reach the League of Conservation Voters.
Conversation Processing Intelligence™ beta website!
Click here to visit the hub of the Klat Network.
This site is part of the Klat network of blogs, forums, and communities.